Note: The first part of this will be my Fantastic Beasts: Secrets of Dumbledore review with no spoilers. Once you see the heading SPOILERS, stop reading if you don’t want them.

I went into seeing the Fantastic Beasts: Secrets of Dumbledore movie with no expectations. I only saw the first two movies once: when they came out in theaters. I remembered overall liking the first Fantastic Beasts. It was cute and happy with bumbling Newt Scamander running around collecting magical creatures in his magical Mary Poppins briefcase. I enjoyed the relationship that Newt developed with the Muggle, Jacob. I also really liked the cute love story between Jacob and a witch, Queenie. Seeing Newt discuss the American wizarding school, Ilvermorny, with his love interest, Tina, was another highlight for me.

Fantastic Beasts: Crimes of Grindelwald movie went off the rails for me. I honestly don’t remember A TON about it, just some high-level things like I remembered from the first one. I remember that it went dark. The tone went from happy-go-lucky to dark and serious and world-ending. Newt got pulled into helping Albus Dumbledore oppose the dark wizard of that time, Gellert Grindelwald. The boy with crazy magical powers, Creedence, was revealed to be a Dumbledore. Queenie went to the dark side. Some of these things I didn’t even remember until I saw this latest installment.

Overall, I enjoy the Fantastic Beasts movies because they show a broader wizarding world than you see from the notoriously unreliable narrator, Harry Potter. It makes sense why the branding is now Wizarding World and not Harry Potter.

Since I hadn’t quite enjoyed Fantastic Beasts: Crimes of Grindelwald, I just went to see Secrets of Dumbledore because I couldn’t stop myself. I’m such a Harry Potter fan that I can’t help but see what’s going on in the Wizarding World whenever something new comes out.

I was pleasantly surprised by Fantastic Beasts: Secrets of Dumbledore. It seems like the movie creators figured out their rhythm and direction better. Now, don’t get me wrong, the tone was still relatively dark and serious, but it had some pleasant comedic relief moments. I think I expected the darkness this time, so it didn’t throw me off as much as it did before. I would not recommend this movie for young children. It was very adult, in my opinion.

All in all, I think it was worth seeing. It exceeded expectations.

I’m just going to write about my takeaways and things I noticed. I saw the Fantastic Beasts: Secrets of Dumbledore movie with my husband, who knows nothing about the Harry Potter universe, so I’m using this as an outlet to talk about the movie because I feel a strong urge! I’m not interested in picking apart plot points unless it just really deviates from the books.

Early in the movie, you see Newt Scamander visit a magical creature (shocker!) that you learn later is called a Qilin. The Qilin is in the middle of labor and gives birth to a baby Qilin. So cute.

It looks like a baby deer almost, but not really.

Then the bad guys show up and kill the mother Qilin and steal the baby from Newt! Poor baby! It gets worse, too for that poor baby. It turns out that Grindelwald has evil plans for the baby Qilin, but you don’t know that at first. When the baby Qilin gets presented to Grindelwald, he cuts its neck and looks in its blood to see certain visions. Let’s go back to Newt for a second. It turns out that the mother Qilin had given birth to another baby Qilin, so Grindelwald had one, but the good guys have the other one.

Jacob Kowalski, the Muggle, has gone back to working in his bakery. In the first movie, he met Newt while trying to get a loan to start a bakery. Now he’s running a bakery, but super sad that the love of his life, Queenie, isn’t there. Queenie is with Grindelwald and, throughout the movie, you’re not sure what her motivations are, but you hope that she’s secretly doing good. The scene shifts to outside, where we’re introduced to a new character, Professor Hicks, a charms professor at Ilvermory. I just checked the Harry Potter wiki site, and apparently she made a cameo in the previous movie, but she plays a much more significant role in this movie. Immediately, I liked Professor Hicks. She’s witty, clever, determined, and just all-around badass — everything you like in a *strong female character.* Professor Hicks pulls Jacob back into the fray.

With the help of Newt, Dumbledore has assembled a squad to thwart Grindelwald. It’s a small, scrappy crew, but isn’t it always? The theme of this movie is to have random weird plans that throw off Grindelwald, who can apparently see the future. There’s a lot of diverging and converging as a team to confuse him. I won’t get into everything because I don’t want to tell you the whole movie.

Here are some highlights for me. At one point, Newt has to rescue his brother Theseus from a magical German jail. There are these small crustacean magical creatures that Newt manages to control with this hilarious pose he has to maintain while saving his brother.  However, there’s a giant monster in the middle of the circular jail that randomly eats people during this whole rescue scene and deposits their decaying corpses on the ground very near where our characters are located. The tiny crustaceans swarm the corpses and devour them. I’m telling you this because it was gross, and want to tell you in case you’re considering taking your children. The baby Qilin’s throat getting cut at the beginning is another point you’d want your kid to close their eyes, I’d think.

In one of the team’s reconverging points, they regroup at Hogwarts to talk to Dumbledore. They meet in the Great Hall during breakfast, which was interesting since students are there. It’s amazing how small and childish they look compared to the adults! It shouldn’t be amazing since Hogwarts is for kids, but you don’t notice it in quite the same way when those very kids play the lead roles. There’s this funny moment where Jacob realizes that the Slytherin kids pranked him by giving him cockroach clusters.

Throughout the movie, I was struck by how open Dumbledore seemed to be about his past with Grindelwald. In the main book, it’s something he seemed to hold very close to his chest. I guess he had to be more open about it for the movie to make sense to a broader audience. And since it was such a large part of the plot of this movie. We met Aberforth, his brother, and we dived into a lot of their back history. Not a lot of it was new, except for the explanation of why Grindelwald claimed that Creedence is a Dumbeldore at the end of the previous movie.

Another thing that struck me is how all the foreign wizards speak English. Even when they don’t need to. For instance, when they were in Germany, the German wizards never spoke German. You saw German signs to indicate the change of location, but there was never a change of language. It kinda threw some things off for me, but ah well.

The end of the movie seemed like the series was half-concluded, but some points could indicate that there will be another movie. I know they’ve planned to make five, which seemed like a lot to me before I saw this one. Now that I have seen this one, I hope they make the following movies! I think they’ve figured out what they’re doing with these now, so I hope they continue making them. As I mentioned before, I really enjoy seeing more of the Wizarding World. It’s fun to see powerful adult wizards doing magic. 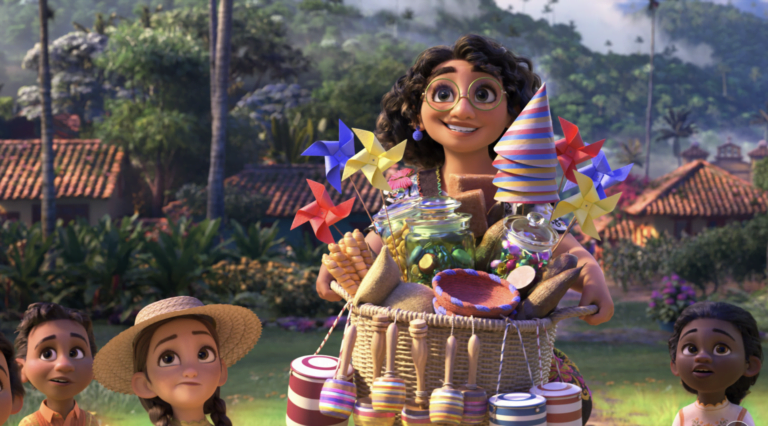 When I read the description for the movie, Encanto, the way I pictured the movie was very different than how it actually panned out.  Here’s the description: Walt Disney Animation Studios’ “Encanto” tells the tale of an extraordinary family, the…