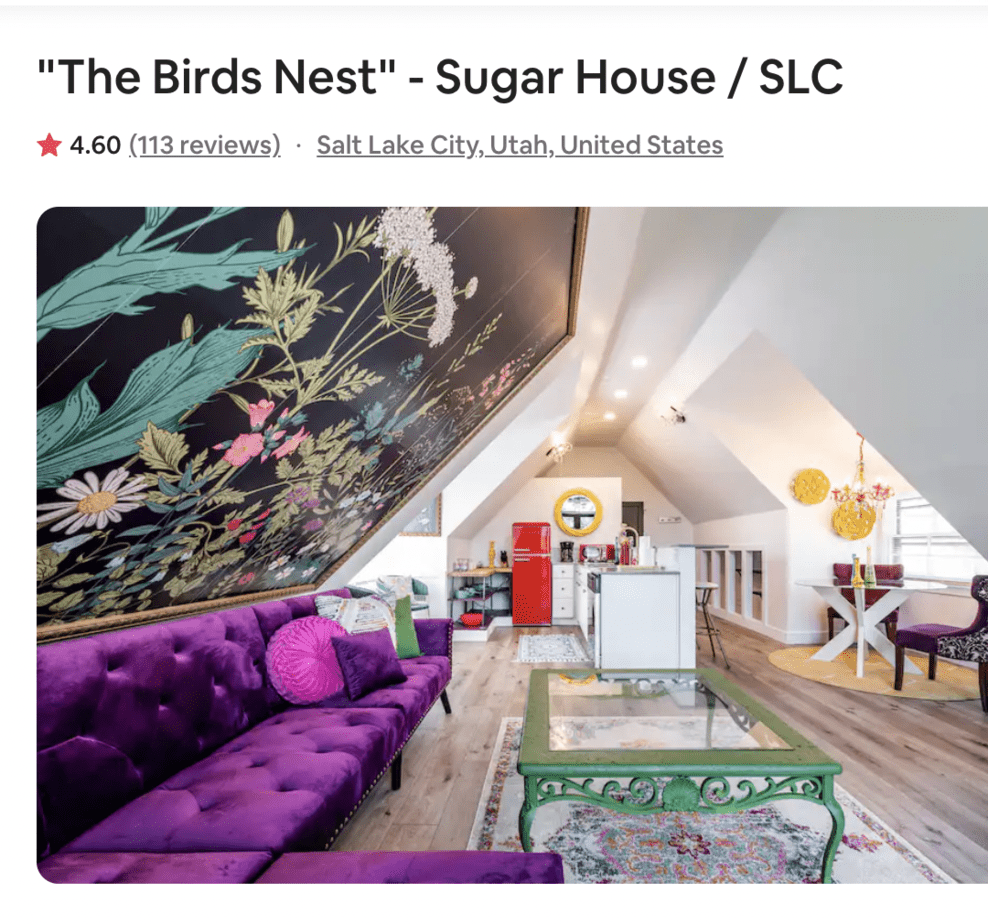 With mountain and skyline views from a rooftop deck, this eclectic Airbnb captured my interest. Just coming away from a writer’s retreat, I wanted a place where I could hang around and keep up my momentum. Paying a little more than I wanted to, I decided to treat myself to “The Bird’s Nest” in Salt Lake City, Utah.

A really important thing to me when looking for an Airbnb is to have the entire place to myself. I’m not particularly interested in sharing with someone. I have a hermit nature and want to be alone when I’m staying somewhere. To my annoyance, as I pulled up to the house, another car was there with people unloading. I assumed they’re staying in a different part of the house. I’d kind of figured out from the description that the place I was in had multiple units. Which was fine, but I didn’t really want to interact with them.

Since they were blocking the driveway, I had to go ask them to let me by. “We booked the whole house,” they said, clearly confused at my presence. I calmly told them that I had booked the upstairs unit. Still bemused, they went to go find it. I don’t think they were happy about me being there. But I figured it wasn’t my problem.

They discovered the entrance to where I was staying and seemed relieved that I wouldn’t have to use the staircase inside. “The cleaners are still here,” they informed me before moving their car. “This place is a mess.”

Interesting… I thought as I walked back to my car to park at the top of the driveway. Sure enough, I saw a car for the cleaning service parked in front of the tiny house I’d also seen while searching the Airbnb website. I had arrived to the house 30 minutes before my supposed check-in time, but the owner had told me I could go ahead and check-in because he thought the cleaners would be done.

Figuring I had some scoping out to do, I grabbed my backpack and climbed up the stairs. To my confusion, there were two sets of doors. One was on the second level and the other was on the third. I went straight up to the top where I recognized the balcony I had seen in the pictures.

As I faced the house, I saw that the door was open, which I thought was strange. Turns out, the cleaning lady was still there tidying up the bedroom. I tried asking her when she’d be done, but she didn’t speak English very well. Thanks to Google Translate, we were able to communicate. Since one of the selling points to me was the balcony, I sat out on the balcony and read while I waited for her to finish. The sun warmed up the cool air enough for me to take off my jacket and relax as I basked in the glow.

Once she was done, I decided to actually take a look around. I’ve been playing around with Instagram Reels lately, so I decided to do a little recording of the place.

Shortly after, I went to use the bathroom and after finishing my business, I realized that there was no toilet paper! Nowhere to be seen. And I really needed some toilet paper, if you know what I mean. So, I went to look for some in the closet, nothing. I looked everywhere. No toilet paper. Desperate, I grabbed some paper towels and used those.

I thought I might try to catch the cleaning lady to see if she had any, but I didn’t want to go into another person’s unit. I ended up contacting the owner and I had to message him a couple of times before he responded. I was just getting ready to walk over to the grocery store, which wasn’t far at all, when he responded that he could bring some. I debated just telling him I would buy it, but the principle of it chafed at me. I paid good money for this one night stay after all! And they didn’t even have something as simple as extra toilet paper? So I told him that would be great. His partner eventually showed up with toilet paper, tissue, and some more soap.

While I was waiting, I started making dinner. Through that process I discovered there weren’t any sponges! I told the owner when she came by, but they didn’t have any on hand so she told me that she noted it for next time. To me that meant, well I guess I don’t need to wash the dishes then… Though after that realized it’s not going to be the owner doing the dishes, it’ll be the cleaning person who comes in. What a mess!

One big reason I like to go for Airbnbs is so that I can have a kitchen and cook. Eating real food is super important to me, so I tend to do my own grocery shopping when I travel.

While this place is charmingly designed, I don’t think the people who set it up really thought about actual logistics of things people really need. It had a coffee maker with no coffee pot. No tea kettle. No blender. No hangers to hang up clothes. I didn’t need the coffee pot, but I was quite disappointed about the lack of tea kettle and blender.

That said, overall, I loved the ambience of the place. It was clearly an old house and had some quirks, but I really felt like I could get a lot done while staying there. One of the things that attracted me was the large bathtub. Someone had left some Epsom Salts and so I took a nice long soak.

When I was ready to get on the internet, the wifi was painfully slow. It appeared that, despite the place having 3 (if not four) units in the place, there was only one wifi router. While it was only me staying in the top unit, there were probably 8 people staying downstairs. That’s a lot of demand on the internet!

At least I can say that I had an adventure!